Transliteration supports over 20 languages. Check out the following video to learn what is transliteration and how to use it. Also try it online.

Transliteration refers to the method of mapping from one system of writing to another based on phonetic similarity. With this tool, you type in Latin letters (e.g. a, b, c etc.), which are converted to characters that have similar pronunciation in the target language. For example, in Hindi transliteration, you can type in "namaste" to get "नमस्ते", which sounds like "namaste". A list of candidate transliterations may show for you to select. Note that “transliteration” is different from “translation”: the conversion is based on the pronunciation, not the meaning.

Transliteration supports fuzzy phonetic mapping. You just type in your best guess of pronunciation in Latin letters and transliteration will match it with the best suggestions. For example, both "namaste" and "nemaste" will be converted to "नमस्ते" as a candidate. 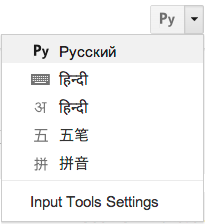 Transliteration is represented by a character from the language, such as

When using a transliteration, type the word phonetically in Latin characters. As you type, you'll see a list of word candidates that map to the phonetic spelling. You can choose a word from the list by taking any of the following actions: 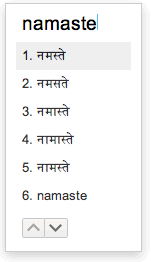 Input methods in other languages:

Let us know what you think – submit feedback.